Title: Damnatio Memoriae
Fandom: Hercules: the Legendary Journeys
Summary: There were some who said, even as boys, that Iolaus balanced the halves of god and human in Hercules. And once he was gone there was no one to steady the scales.
Genre: tragedy, drama
Characters: Hercules, Jason, Iphicles, Niobe, Nemesis, the Fates, Persephone, Zeus
Pairings: none
Warnings: season five AU, violence

Then I'll Find You

Lucy Lawless was on "The Soup".

Remember her? Yeah she was on a few episodes of Herc.

I wonder whatever happened to her...

Here's a pic of the first season's DVD cover for the re-release coming out in 2010. Still no details on special features, audio, or really anything else that may be of interest: 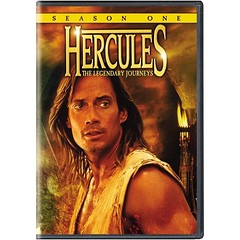 This compelling TV series from Executive Producer Sam Raimi (Spider-Man movies) follows the warrior from his humble beginnings as a child born to a beautiful mortal woman and Zeus, king of the gods, to his explosive battles against power-hungry immortals, deceptive demons, massive monsters, and bloodthirsty armies. With special guest appearances by Lucy Lawless (Xena: Warrior Princess), Bruce Campbell (Army of Darkness), Renée O'Connor (Xena: Warrior Princess) and Hollywood legend Anthony Quinn, it's an unforgettable trip into the world of legends with a man who will never rest as long as people need his help.

Previously available as a 2003 Anchor Bay release (now discontinued), this morning Universal Studios Home Entertainment announced they putting out a new DVD set on April 20th of Hercules: The Legendary Journeys - Season 1. You'll get a much slimmer set this time, though, with only 3 single-sided discs in the set for $26.98 SRP (compared to Anchor Bay's original $89.98 SRP price tag for a 7-disc set).

So, in an effort to liven up the comm, I figured I would ask a question that everyone is dying to know. What is your favorite H: TLJ comedy episode? And why?

For me, it would be both Yes, Virgina There Is A Hercules and For Those Of You Just Joining Us. Why? Well, it was just genius for the actors to play the staff in an episode. They did it brillantly! And for the awesome plot twist that Kevin Sorbo is really Herc? Some of the best episodes! And I can't believe I'm going to say this, but I actually think that those two episodes were funnier than some of the Xena comedies!

Just found out that Kevin Sorbo is going to be a guest at the 2008 Dragon*Con (which is held in Atlanta during Labor Day weekend) Can you tell I'm psyched? David Franklin (who played Brutus on Xena: Warrior Princess) is also going to be a guest.

For more info, visit the offfical convention site at Dragon*Con.com

Alright, this is how terrible a person I am. Some of you might possibly recognize my name as being listed as the moderator for this community. Until February, I was the only mod. Then

solidfoamsoul (who's my best friend in real life) called me one day, asking how she went about making herself a mod to "one of my communities". I guided her through signing into my account and going to the community management panel, because that's not a suspicious request in the least for us. It stands to reason that if I'm the mod (especially the founding mod) of a community, eventually she'll be one as well, because that's just how we roll.

Anyway, that was the last I heard of it.

Until tonight, when I was poking around my communities.

My own community lies completely dead and unused for a year and a half, and then stuff happens, and I don't even notice.

In my defense, in December 2006 I lost my internet, while I was still working on designing the community's layout (and hadn't wanted to open before it was set up), and only *just* regained it about two weeks ago. But still. That's inexcusable.

Anyway, what are some of your favorite just plain silly Herc moments?

I know, faithful members, that this community has gone quiet for far too long.

So I just wanna say, thanks, faithful members. Both of you. (Not a joke but a stirring simulation.)

So, this community is for Hercules! The Legendary Journeys!! Anything at all related to the show is accepted. (Xena stuffs included, but ya know it's inevitable.) Icons, fan fic, macros, dicussion, references, mentions, ANYTHING! Heard about Bruce Campbell's new movie? Post it here! Alexandra Tyding's gonna be at a convention?! Let us know! Just figured out Robert Trebor is a palindrome? Tell us!


Meanwhile, please to be enjoying this picture of Iolaus eating a carrot.

Is he being extremely naughty? Or is his little stomach just growling?